Most travel bloggers who go through Yellowstone would likely write about the wolves they saw (which we did), the Grizzlies (ours was a sow with two cubs) and the geysers shooting their geothermal steam and minerals into rainbows of sulfur painted landscapes. 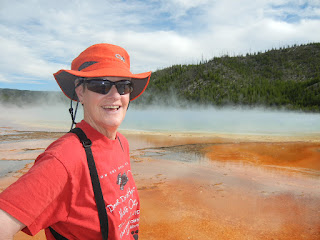 We were fascinated by not only all of those sights, but of the sights and sounds of the Yellowstone Groupies.  Yellowstone  Groupies can be easily identified by their clustering around spotting scopes (much like Jess does), wielding walkie-talkies and  reporting the positions of the wolves, grizzlies, or the timing of geyser eruptions (Jess had talked them out of the frequencies for everything in the park, including the research plane (140.500), within 60 minutes of crossing into the Groupies' territories), and wearing flopping nylon shirts, hats, and pants (which made Sally able to infiltrate them with perfect ease).

They are a culture of people that follow the researchers and rangers with adoration and the secret pleasure of inside knowledge that they dole out to novice park goers with an air of expertise only typically found in front of a lectern or from politicians during re-election campaigns.

We were fascinated by them and studied them through the day as the animals scampered around us and the geysers blew.  With certainty, there is a master’s study in anthropology waiting for the right student of human behavior.

We left the park watching as rangers used bullhorns and threats of arrest to warn away a pack of photographer/tourists circling a herd of elk with five babies bedded down in a median in the middle of the bustling community of Mammoth Hot Springs.  We found ourselves thinking about what is “wild” and “untamed” and realizing it is the people rather than the patient animals of Yellowstone National Park.

Posted from Spokane, Washington
Posted by Jess and Sally at 2:11 PM No comments:

As Good As It Gets

So what does it feel like on the day you leave everything behind and leap into the unknown?  While there is all of the emotion anticipated in leaving friends, family and community, the power of the moment still took us by surprise.  We had sold the house earlier in the first week of June, so we camped out on Western State College’s campus as Jess finished her work responsibilities.  (She then changed clothes to her beloved Tevas, t-shirt and river pants that Friday afternoon as she left the Board of Trustees meeting.)  As we walked toward the van to drive north, we felt…. 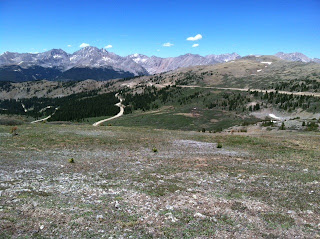 Those emotions remain almost two weeks later as we travel through the country enjoying the ability to wake up each day and the uncertainty of what the day will bring.  We have watched moose spar, waited for a herd of buffalo to pass, and sat by a baby porcupine while its mother flared her annoyance at our audacity.  We have sat silently and admired Bierstadt’s landscapes then moved into them.

For those of you interested in following our journey northward, we will try to post a story a week.  When it gets cold and dark in Alaska, we will make the jump to our international portion of this journey.  We have no idea where that first stop will be and love not knowing the answer to that question… yet.

Posted from Cody, Wyoming
Posted by Jess and Sally at 7:14 AM 3 comments:

The most valuable things we own...


It is interesting to find out, when one intends to save less than 10% of everything that has been accumulated during a lifetime, what is determined to be valuable.  As we began the purge more than 2 years ago, we realized that even the things we had kept since we were three years old were no longer a part of our identity.  We also found, to our horror, that we had accumulated more than we would ever have guessed.  We set about trying to respectfully depart with our physical possessions through gifting, garage sales, and donations to non-profits or resale shops.

How does one get to the point that he or she is donating 2 large garbage bags of t-shirts to an organization that sends them to people suffering from natural disasters?  Who needs over 2 dozen screwdrivers, 2 table saws, or 3 dozen coats?  We never really thought of ourselves as accumulators; however, as each cupboard and closet yielded things we had not used much in the past decade, we could not help but wonder at the economic, environmental, and social cost of each item.

So what did we save?  We digitized our music, our slides, and our photos.  We took pictures of many things we valued rather than holding on to the items.  We scanned letters, documents, and recipes.  But there were things that we were not ready to let go.

My (Jess) earliest memories of my grandmother include her winding her gold watch every night while listening to my school stories as I shoved homemade cookies down with gulps of freshly squeezed orange juice she had made for me.  When I touch the broken watch with the gold plated tarnish fading away, I am transported to a time of fishing, laughing, cooking, and loving.  My grandparents lived next door to us in California since I was 7 and their wisdom, humor and perspectives on life influenced an entire generation of grandkids.  When grandma passed, my mom said she had wanted me to have her gold watch.  It did not take long in the flooded savannahs of Venezuela for it to break over two decades ago.  I had been foolish to wear it there, but I wanted my grandmother with me.

Recently, I tried once again to get it repaired and the kind watchmaker suggested that I check the internet to see if the company that made it had a repair depot.  They did not, but in the search for the repair depot, I found links to Ebay.  Curiously, knowing the watch was over 50 years old, I clicked on links of people trying to sell their watches.  On average, it was worth about $13.97.

As we each pondered what was of importance to us to save or store, we realized it had little to do with monetary value, but everything to do with the people we loved.

Posted by Jess and Sally at 8:10 AM No comments:

From Rico to Ridgway 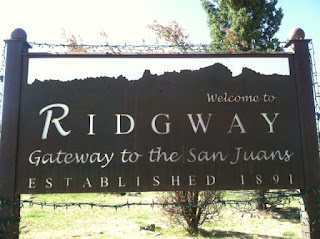 Friends have asked how we came to decide to sell most everything we own, become homeless and unemployed, and seek to learn with humility and grow together.  In reality, it took us about 30 minutes to decide somewhere between Rico and Ridgway in the San Juan Mountains more than two years ago.  Rico and Ridgway are both quintessential, tiny Rocky Mountain towns.  Rico is so small there is no population listed in the atlas and Ridgway, 90 miles away, has a population under 1,000.  In between the two town sites, Lizard Head Pass and Dallas Divide contain granite monoliths crusted by white caps of snow reaching soulfully into the sky.  The vista inspires the type of thinking that leads one to ask questions about life, personal growth, and values.  In December of 2009, as we drove between Rico and Ridgway, we discussed that whatever we did next in life as Sally retired in two and half years, we needed to do together. We needed to challenge ourselves with new experiences and personal growth, and we needed to give back to a world that had given us so much.

The world.  We began to discuss how we had both been raised in white, middle-class America and had spent most of our lives working in natural resources and education.  We realized that there were over 7 billion people with countless cultures that had much to teach us if we could figure out how to listen, observe, participate, and learn.  We also discussed how our most significant learning came when we had little safety net, when we leaped forward into the unknown, but maintained our values and principles in the journey forward.

By the end of the 30 minutes, we knew we had to let go of a life we loved, a place that may be one of the most special on earth, and the daily comfort of community.  We needed to voyage into the unknown.

So the journey began with finding out how to let go of over a combined 100 years of items we take with us through life, giving notice to our different places of employment, and learning how to live a more nomadic life with the goal of carrying no more than 15 pounds each.

We had much to do and much to learn.