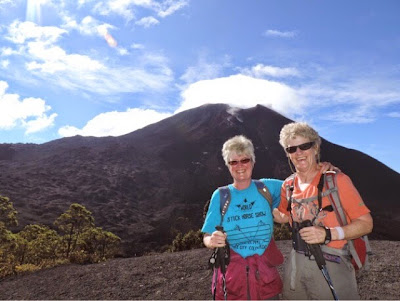 As we begin our trips, we seek to stay open to learning what the earth and its populations have to share with us.  We are never sure what will emerge to fascinate us in a given place.  So far, this trip, we have been drawn to "the Ring of Fire."  About 75% of the world's volcanoes and 90% of the world's earthquakes occur in this aptly nicknamed region where plates collide and the earth shudders and erupts under the pressure of unimaginable forces.  We have wandered this region through much of our past two years of travel.  We have felt the tremors in Alaska and been welcomed our first night in Costa Rica by our host yelling "come outside" as he ran outside past us as lamps swayed.  We were in Peru and Chile for shakes and shudders, but missed the severe earthquake in the Philippines that caught our good friends, the Vopnis, and the lovely people of Bohol Island in its destructive waves of undulating power.  In Indonesia we met a team of emergency response planners helping to rebuild areas that had been crushed by the Ring's power in the past and helping to better prepare its citizens for their inevitable future.  We gazed on a changed Christchurch, New Zealand, and a still heavily damaged and destroyed Conception, Chile, after their 2011 and 2010 earthquakes, and we pondered the differences in abilities of developed versus developing countries to respond to and rebuild after such incredible natural disasters. 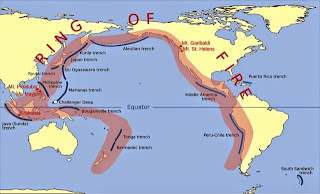 We are not strangers to this incredible horseshoe-shaped zone which gives testament to the earth's forces and the fragility of our feeble structures and lives when the forces are unleashed.  Yet, the volcanoes of Central America have captured us, drawn us in, and fed our imaginations and fueled our curiosity.  They loom over much of the landscape, with towns frightfully close to their scarred flanks, many active, some devastatingly so.  We gaze upon their shapes, so different than most of our Rocky Mountains whose ages of volcanism are not easily understood in their current dormant slumber.  These volcanoes are young and they smolder, puffing out ominous ash clouds with steaming vents creating clouds covering their sides.   And, much to our surprise one afternoon while in Antigua, they erupt.  The ash that cascaded down on us was acrid and the air burned our eyes and noses.  Our hearts quickened to hear the news that some locals thought it was the steaming giant,  Pacaya, where we had light heartedly roasted marshmallows the day before in playful tourist activity, with little respect for the power we tempted as we unearthed its lava, young stone created just a year before, to dig deeper into the hot maul of the planet's crust. 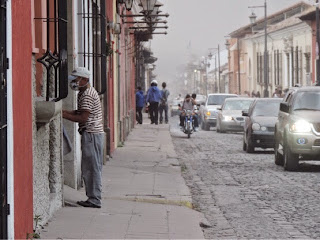 It was, instead, the restless Fuego (Fire) Volcano, less than a dozen miles away that with one "burp" shut down all international air traffic to Guatemala and dusted the gorgeous colonial city of Antigua with grey ash.  Antigua, like most Central America capitals we have visited in the Ring of Fire, has fallen multiple times as the earth's plates slipped and slid and cathedrals tumbled while adjacent homes crashed into ruble. 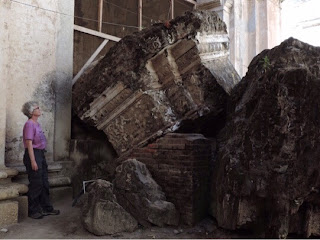 These experiences simply seemed to increase our hunger to gaze deeper into these conical forces of nature, and we hurried onward to Nicaragua where visitors can peer into a crater filled with poisonous gasses and rising steam to see the heartbeat of the planet in flowing magma as red lava bubbles to the surface.  Even the story from our local guide during the hike to the crater about his experience a year ago on Telica did not dissuade us.  The volcano erupted while he and four girls were peering over the same rim!  The story, in fact, made us more curious to experience it ourselves. People ask us about health and safety while we travel.  We get our vaccinations, take our pharmacy of western miracles with us, and are careful of where we go, who we trust, what places we wander during the day or night.  So what draws us to creep on our bellies along side tarantulas and scorpions to the edge of a volcanic crater knowing the power it is barely restraining in that one moment?  Why, as we write this, do the cones across the plains outside of our bus window beckon us with their majestic views commanding the landscape?

We can hear Johnny Cash's lyrics in our heads, knowing that there is truth to the seductive ring of fire.  His lyrics are about love, and our experiences are about landscapes; however, both lead to being drawn into something bigger and more powerful than our minds can fathom. 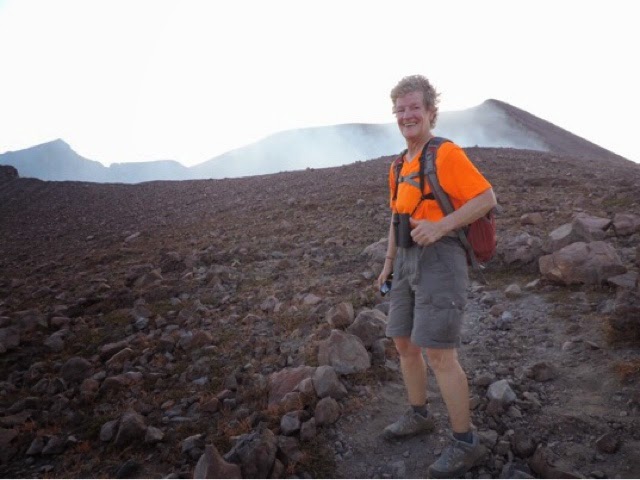 Posted in Granada, Nicaragua.  Images are of our visit to Pacaya Volcano, the ring of fire map, the aftermath of Fuego's eruption, Sally's first view of Telica's crater and the rubble from Antigua's earthquake.