It is a real surprise when, after almost 14 months of international travel in about a dozen countries, there is a confrontation with culture shock.  We have been fascinated, intrigued, curious, and confused by cultural practices and daily life.  But until Thailand, we had not really felt the disorientation that comes with being a flopping fish out of water.  Culture shock.
It surprised us.  We have learned to quickly adapt to novel and sometimes even bizarre situations without so much as an eye blink.  However, things were about to get a bit more complicated.  Thank goodness we had a little bit of a warning from a fellow traveler and friend, Juraj, who kindly went out of his way to reunite with us in Bali.  We had last seen Juraj on a mountain in Malaysia.  He typifies a young, gracious, independent world backpacker as he travels from his native Eastern Europe through the world.  He has given us excellent travel advice, but mentioned that Thailand was hard for an independent traveler. 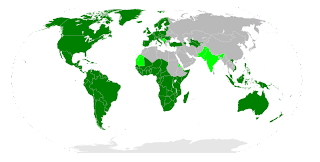 Until this point in our journey, one of us either somewhat understood the language (with perhaps the exception of southern New Zealand and certain ranchers in Australia) and we both could read signs.  Until now, we had traveled in areas where letters are written with the Roman alphabet (see map of the Roman alphabet global distribution).  We were also in countries where English is typically taught in primary and/or secondary school.  While many people we met had forgotten much of the English or had not been able to attend much school, most used and/or understood some words or there was generally a person nearby who was relatively fluent. 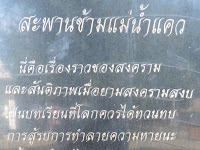 None of this was true in Thailand.  In the areas we first visited, we quickly learned the word "farang" for foreigner, but we were in a place in which not a single road sign, menu, or posted paper made sense.  The words were long, ornate, and created by completely unrecognizable scribbles that could have been a lost ancient language to our Roman alphabet trained brains.   Few spoke English and our Thai was limited to "good morning" and "thank you."  Even our reliable "Google Map App" had mysterious scribblings as street names.  We were lucky as we began the trip staying with two wonderful guys, Ben and Yom.  Yom is a native Thai and his help in the first week greatly reduced the dual challenges of a new culture and written language.  Ben is a recovering Southern Californian who has made Thailand his home for the past 8 years and graciously invited us to it when we met in the Philippines.  Both have been excellent hosts, helping us ease past the initial confusion and overwhelming sense of "different". 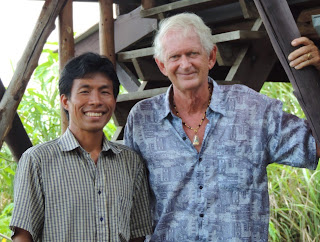 Despite Ben's and Yom's help, we are still experiencing some of our first real taste of culture shock as we crossed our newest frontier into mainland Asia.  We are thankful for the year of travel leading us now to visit places with people of good will but no common oral or written language.  Our first year gave us the confidence to move through large cities and countrysides in new places with different currencies, logistics, and cultures.  We can now apply these lessons to our future destinations in Asia and beyond.  We will have to change some of how, and possibly where, we travel as we work out new logistic challenges.  However, it is these very challenges that we love.  While they can tire and test us at times and make us appreciate how easy it can be back at home, they inspire us and, most importantly, drive us to learn.
Posted in Angsila, Thailand.  Images are of a country map of where the Roman alphabet is in use, a typical Thai language plaque at a national park, and Ben and Yom, our hosts extraordinaire!
Posted by Jess and Sally at 9:59 PM 2 comments: