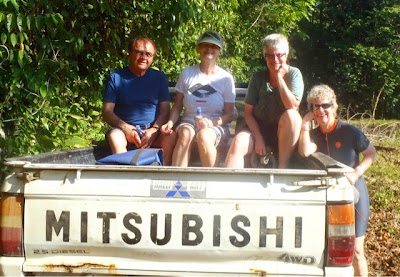 If you read our Facebook posts, more often than not, our trips many times seem like exotic adventures with incredible wildlife, views, and food. However, extended travel, especially budget travel, has elements that are more reminiscent of running a gauntlet than floating down the river of life.  One example of a physical beating came earlier this month as we descended from a mountaintop toward our ferry in a jeep that would be more appropriately placed in the Disney "Raiders of the Lost Ark" ride.  The jeep bounced and careened through the jungle avoiding falling trees and giant rolling stones and narrowly missing both wildlife and locals.  To add fun to this particular day trip, there were three of us in the narrow backseat meant only for two.  One particularly vicious bump broke one of the two seats causing an even more torturous trip.  We pulled up, with palatable relief (checking to see if any herniated discs had actually ruptured or any bones had broken), to the realization that our ferry, due to unseasonably high winds, had crashed into the dock and demolished it.  The boat, itself, had run aground, was now firmly wedged against the shore, and would ultimately require a tugboat to extricate it.  The day was young though, and a series of three more vehicles and a detour around the peninsula in what felt like Sahara Desert heat eventually found us sipping margaritas and watching ladies of the evening troll for tourists in a southern Costa Rican town. 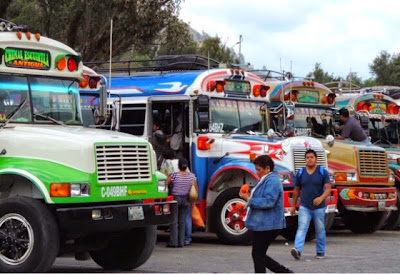 In Central America, some of our gauntlets have been much more perilous and even a simple stroll from very comfortable lodging to a nearby restaurant can be an invitation for armed robbery.  We have been lucky and always ask about the "dos and don'ts" of any given place we stay, but the armed civil conflicts in Guatemala and Nicaragua have left a legacy of guns and people who will use them.  In one small area where we stayed in Nicaragua, the situation was deteriorating to the point that locals ran out to warn us not to walk on the road one night, the only road back to our hotel.  The road had seen three armed robberies in the past week in the dark, unlit spaces along the route.  We ran that gauntlet behind a kind waiter on his motorbike as he zipped us home, one at a time.  While there was often such a danger near us, we were saddened by how much more severe the dangers within Guatemala were for its own citizens where one of the least safe occupations has become driving a chicken bus.  Over 900 bus drivers have been killed by the gangs in and near Guatemala City and the gauntlets those men face each day are incomprehensible. http://www.newrepublic.com/article/113293/900-bus-drivers-dead-guatemala-city-worlds-most-dangerous-job.  We avoided chicken buses, for the most part, in Guatemala. 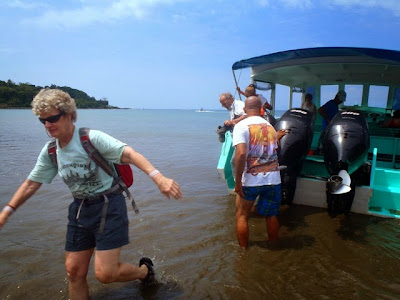 Other types of gauntlets that are more typical in our travel life are those associated with border crossings.  The gauntlet of a border crossing can be a rite of passage rather than a simple step across the imaginary lines drawn and defended by countries all over the world.  Our crossing from Belize into Guatamala by boat was one such journey in which our poor herniated discs were tested again by each slam into the waves of the bow of the speedboat.  The four young backpackers who had planned to head south to Honduras clambered off the boat with us in Guatemala, unable to take another minute of pain.  As can be common at border crossings, a hoard of helpful and hopeful touts surrounded them, as the boat captain warned us of the perils in listening to their plans and pleas.  On that day, we had a long, hot climb up a hill, surrounded by men wanting to lead us to places we did not want to go, to a local immigration officer who let two of us in at a time to decide whether we were drug runners (particularly common there) or tourists.

While boarding crossings can be stressful or interesting to us, they can be tragic for others.  As with the complicated immigration issues between the United States and Mexico, Costa Rica affords many opportunities to the people of their poorest neighbor, Nicaragua.  The average annual wage in Costa Rica is ~$5,000.  While that may not sound like a lot in the USA, it is five times the wage of those in adjacent Nicaragua.  Over 500,000 Nicaraguans provide farm labor and menial service to the companies and households within Costa Rica and many cannot do so legally, instead often risking much in false papers and unsafe border crossings.  We met one such young women on a bus full of locals leaving the Costa Rican border.  Police stopped the bus twice near the border, questioning people closely and scrutinizing their documents.  For this girl, probably about 16, the second stop was a nightmare.  Her documents were insufficient and she broke down in tears, freezing in her seat, as they tried to lead her off the bus and back to the border.  She cried out that she had no money and no place to return to.  Local Costa Ricans, or Ticos as they call themselves, well known for their manners and patience, finally started to get frustrated in the metal oven that was baking us all.  Kindness prevailed and a collection was taken up for the young girl who gripped the bills in one hand and her basket in the other, led off by a heavily armed policeman who was frightening to us and must have been terrifying to her.  These gauntlets emerge everywhere where global disparity in wealth pulls people into dangerous and illegal corridors.  So many of my friends and family have strong, often polarizing opinions about these issues, but few of us have had to face this particular gauntlet ourselves.

As we travel, we experience so many amazing people, we see things such as festivals, and we experience food, culture and authentic friendships.  But sometimes, to get to these people and places, we run a gauntlet.  In the end, it is not so much our challenges that stay with us beyond funny stories to tell friends and family, it is the daily dangers to others that bother us, disturb us, and make us thankful for our own lives.

Posted at Finca Bellavista, Costa Rica.  Images are of a ride in the back of a local truck to a destination in Costa Rica, chicken busses in Guatemala headed back to the city, and one of the many wet exits from one of the many boat rides.
Posted by Jess and Sally at 4:41 PM No comments: