She named him Lucky 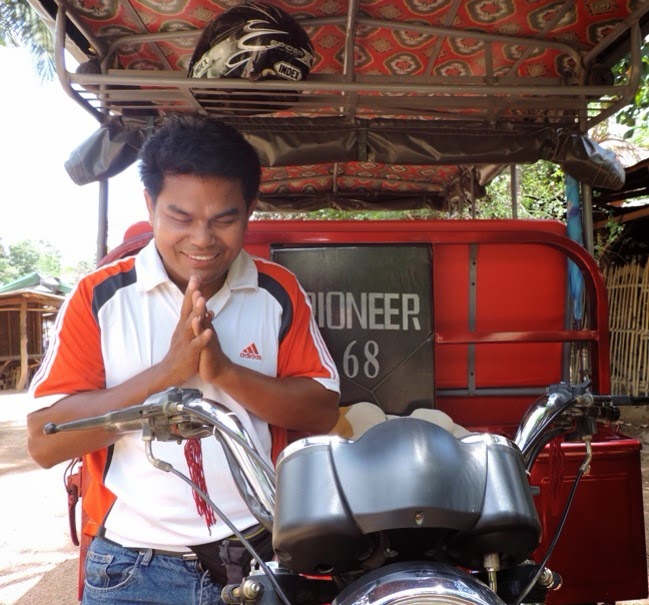 She named her new born son, Samnang, or "Lucky," an inconceivable choice on the night he arrived sometime in April of 1975.  She gave him life, afraid for her own and her family's.  No nurses could help her, soldiers fighting nearby could be heard, and within days of his arrival, he and his family were refugees, fleeing the Khmer Rouge.  Maybe she had a precognition and knew he would be the only one of her family of seven to survive.

We met Lucky at our bus station. Our accommodation, the Battambang Resort, sent him to fetch us to their peaceful place among rice fields near the town of Battambang.  It was not so peaceful four decades ago as his dad, a local police commander, knew it was time to hide his identity and flee northward with his family.  They, along with millions of other refugees, were swept up by the revolution.  Lucky's oldest brother was only 12, his three sisters 9, 7, and 5.  The family was split up as refugee children 5 and older were sent to distant child labor camps.  His siblings worked at making fertilizer by collecting cow dung from the rice fields and mixing it with vegetation.  They were worked hard, fed little, and one by one each starved to death.  His dad successfully hid his identity for a year and a half, but someone finally recognized and reported him.  His previous occupation, like those of teachers, administrators, and doctors, was now a death warrant.  He was taken away and never seen again.

Lucky and his mom were now alone, with his mom required to perform hard labor in the fields each day. 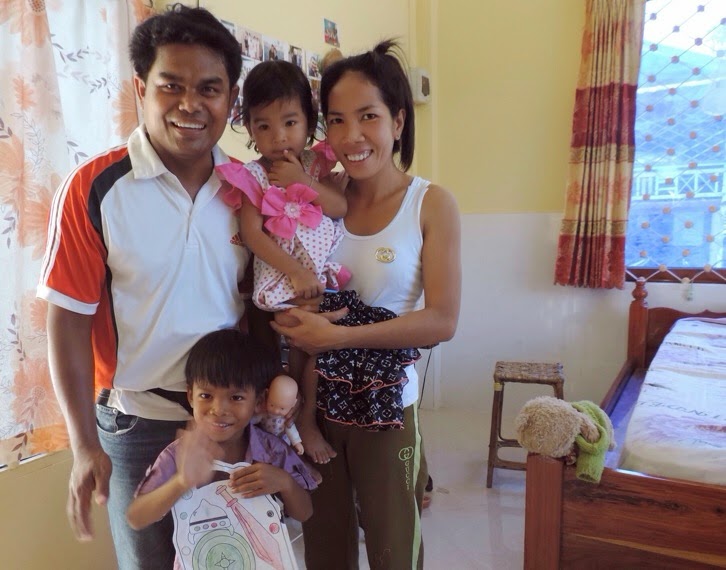 She hid the young toddler in pits in the ground as the Khmer Rouge soldiers would bayonet crying babies who distracted their mothers from their fieldwork.  As the Vietnamese arrived, the now four-year-old boy and his mother escaped to a series of refugee camps, first near, then over, the Thai border.  Some had no support, but by 1982, Bangphu, where they ended up along with thousands of other Cambodian refugees, received support and supplies from other nations.  Lucky started to realize the meaning of his name at Bangphu when camp workers mistook him for a girl and gave him and his mother two ration cards.  Only girls and women received the cards that brought servings of rice and canned fish to the struggling family.  He vividly remembers and is forever grateful to the personnel of UNBRO (United Nations Border Relief Organization) who brought food and some stability to his war-torn life.  At the camp where he was to live for 9 years, he was able to go to primary and secondary school, learn some English, and eat much more regularly.  Despite the hospital there, his mother's bloody coughs led inevitably to her death when he was 14.  By 16, he was a migrant worker in Thailand, digging potatoes for a few months.  A family of opium dealers took him in to watch their children, promising him a dollar a day which he never received.  Leaving them a few months later, he followed others across the narrow trails through heavily land mined forest between Cambodia and Thailand, fearing even stopping to lie down to sleep.

Back in Cambodia, Lucky was finally reunited with cousins, aunts and uncles he had never met.  His life continued to improve with hard labor as a tree cutter then slowly working his way to buying his first tuk-tuk.  He practiced English by listening to radio free America and with tourists.  With time, he met his wonderful wife and now they have a four-year-old son and a two-year-old daughter.  At 35, his mother's choice of his 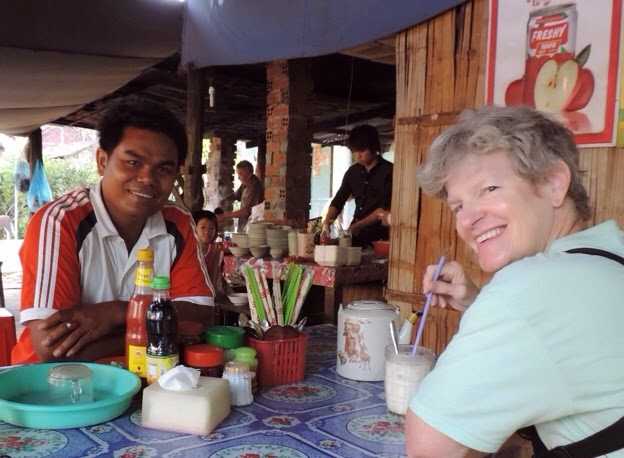 name became fully realized.  An Australian family taking a tour with him became interested and invested in his life.  They helped him build a nice home and to acquire a new, fancy tuk-tuk when his old one died.  He cannot believe his "luck" and pictures of these special friends adorn the walls of his small, but beautiful new home.

Visiting his home, watching him play with his son, made us remember how "lucky" most of us really are who were born in a wealthy nation with significant peace and prosperity.  Unlike our new Cambodian friend, Lucky, we know the date of our birth.  We have albums full of family photos.  We have never had to face imminent starvation and the despair of being completely alone.  Though we may feel like we are walking a tightrope at times, there are no real land mines to face if we misstep, just imaginary ones.  We are lucky.

Images are of Lucky with his new Tuk Tuk, family and having a traditional Cambodian breakfast with Sally. If you would like to contact Lucky he can be reached from the Battambang Resort or at +855 12687098 (international) or 012687098 (local). Posted at Battambang, Cambodia.
Posted by Jess and Sally at 8:29 PM 1 comment: 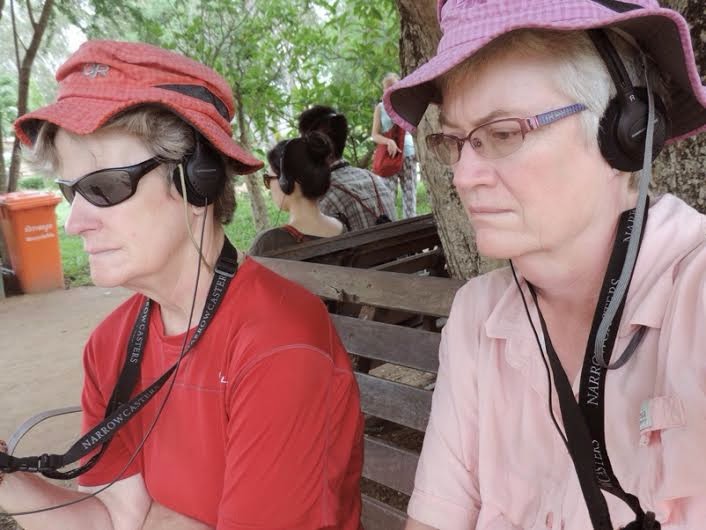 As we travel, we tend to visit the places that make us feel good.  We love the vast, mind numbing landscapes; gorgeous and unique animals; pristine or at least somewhat intact ecosystems; exotic cultures; and, most of all, warm, kind people.  But part of our journey and commitment to "learn with humility" occasionally takes us to the dark side of humanity, to places where unspeakable cruelty to others or the planet shakes us.  Gives us pause.  Makes us cry.

Cambodia has both....significant culture, beauty, and a dark history and challenging present.  Most people fly in and visit the unequaled ruins of Angkor Wat, touring sites from what many say were the peak of Khmer civilization now centuries past.  In doing so, they avoid the lands, especially those near the northwest and southeast borders, seeded with millions of unexploded bombs and land mines. Cambodia has the highest percentage of land mine amputees in the
world, and it is not just people who lose limbs.  We watched an elephant amputee hobble on its prosthetic as well.  Everywhere we visit within the country, limbless victims are seeking and needing help.  Most of the land mines were laid by either the Khmer Rouge in the late 1970's or Vietnam soldiers during their decade of rule in the 1980's.  Other unexploded bombs are legacies from the U.S. and other countries that carpet 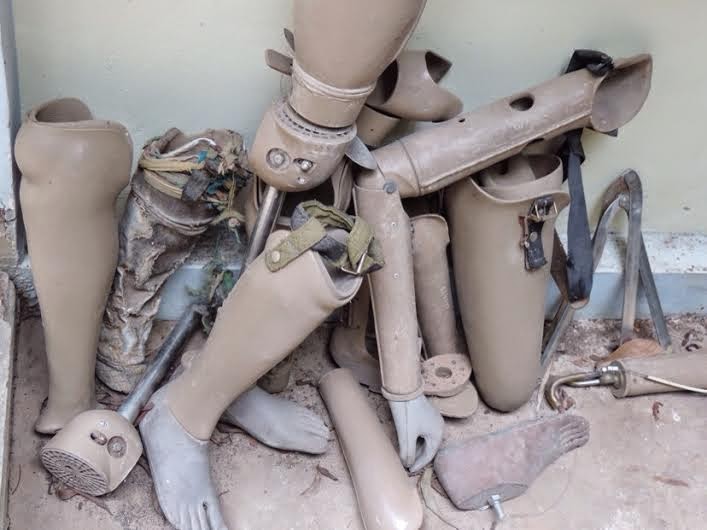 bombed the country in the early 1970's during the Vietnam War. Three decades of war have left a legacy of fear and real danger.  Many farmers are still afraid to enter their own agricultural land in small villages as most land mine victims meet their fate in fields.

This is a country that has experienced genocide during our lifetime.  While we were in high school or getting our first jobs after college from 1975 to 1979, Cambodians experienced the massacre of between 20 to 30% of their population at the hands of an extremist Communist group of their own countrymen, Pol Pot's Khmer Rouge.  Can you imagine one out of every three or four people you know being brutally murdered in "Killing Fields" or dying of starvation or disease?  Over one third of the country's population was expelled from homes in the cities and forced to work with little food and no medicine in the countryside.  We visited one of the hundreds of mass graves, or killing fields, near Phnom Penh.  As we listened to the audio tour, we stared at fragments of human bone and clothing still emerging from the ground.  We stood before 9,000 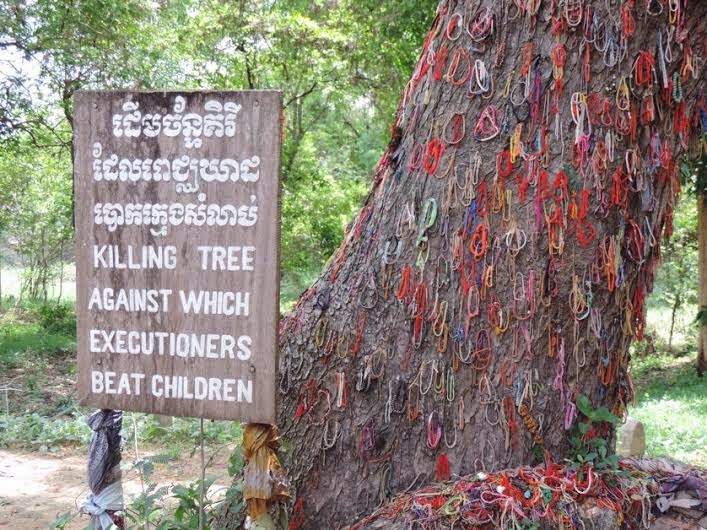 skulls while listening to the voices of the actual guards talk about how they would beat the prisoners to death since bullets were too valuable to "waste" on such things.  And we broke down a bit when we saw the tree against which infants' heads were smashed.  The Khmer Rouge was a brutal, ugly regime that targeted the educated in particular.  Even wearing glasses was a sign of being an intellectual and marked the person for certain death.  When the Vietnamese invaded in 1979 and subsequently ruled the country for over a decade, they chose one of the the defecting Khmer Rouge soldiers, Hun Sen, as the country's new leader.  Despite significant international and UN investment beginning in 1993 and continuing to this day, the same leader, Hun Sen, has been elected lord prime minister and supreme military commander in every election since 1993.  He has been the de facto ruler for more than three decades.  The Khmer Rouge was a functioning organization almost to the final day of the 20th century and its leader, Pol Pot, died in 1998 at the age of 82 before he could be brought to trial.  Today, Cambodians lack educational opportunities, clean water, and basic health care as compared to their neighboring Southeast Asia countries.  Many of their current teachers have little education, never having attended more than primary school.  Some estimates suggest that over one quarter of the current population is still suffering from PTSD and that domestic violence is actually rising rather than declining.

Yet, there are heroes.  There is light even in this dark place where people suffered so much in the past decades.  We met one of the boy soldiers of the Khmer Rouge, Aki Ra, at his land mine museum and 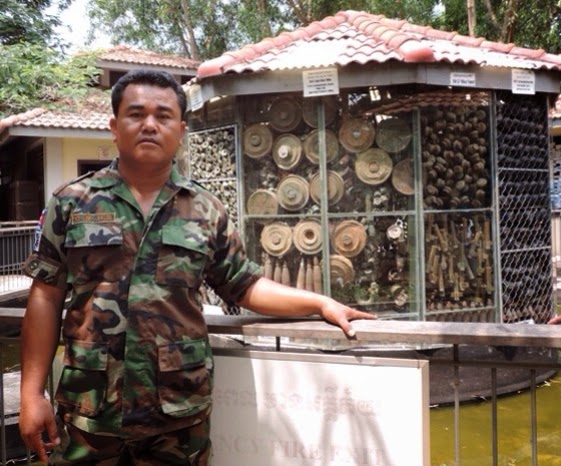 orphanage.   As a child soldier, he laid thousands of land mines.  He has now created an organization to defuse and remove the mines, an educational museum for world travelers, and an orphanage to take care of children affected by land mines.  We also met people working for The Wildlife Alliance, an organization helping to provide for animal victims of land mines, such as the fortunate elephant we witnessed with its own prosthetic.  This organization is also dedicated to strengthening policy measures preventing the habitat deforestation, a practice that reached its heyday with Pol Pot's leaders as they sold timber to Thailand and elsewhere and still continues today.  The organization also has an anti-poaching militarized arm to stop the trade of endangered wildlife and pet species.  Many of our heroes are less obvious on the world stage.  Despite being in a country better known for corruption and bribes, we have experienced kind, caring individuals who have helped us, rather than cheated us, even when such would be easy.  We meet young people taking college classes.  And everywhere, NGO's are at work, trying to provide infrastructure that has yet to emerge from the government.

Not all of our lessons are gentle as we travel the world.  Sometimes, we venture to places that frighten us, disturb us, and make us want to turn away.  Yet these are also places that most need global citizens to better understand them and, where appropriate, to give with grace.

Posted in Phnom Penh, Cambodia.  Images are of us listening to the horrors of the killing fields; a pile of used prosthetics at the orphanage; the tree used to kill infants near the mass graves of mothers; Aki Ra and his collection of defused land mines and other armaments.