As we head out of Latin America, we decided to finish this part of our "hundred stories" with two of our favorite events.  Both were unexpected in the power they had to tap into our deepest childhood memories. 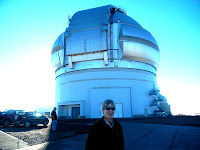 My dream as I was growing up was to become an astronomer.  At the age of seven, I was totally captivated when Sputnik was launched.  Space captured my imagination, and I spent many hours gazing skyward, identifying constellations and looking for planets.  As the space race began, I became especially interested in the Gemini and Apollo projects and kept a thick scrapbook of newspaper clippings concerning each mission. 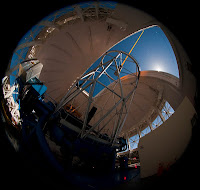 As happens many times in life, as I grew older, I followed many different paths and left my dreams of astronomy behind.  Though still perking my interest when major stories concerning the skies, heavenly bodies, and space craft were broadcast, I no longer pursued my dream with the energy I had displayed in my earlier years. 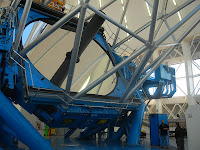 Dreams have a way of being realized sometimes in the future.  Last night I had the opportunity to realize a part of my dreams in a major way when I was able to stand, awestruck, in the middle of a giant observatory and watch as it "woke up" to the night sky.  My guide in this miraculous opportunity was a young astronomer who is just now beginning his lifetime journey investigating the vast universe through the lens of the incredible scope housed in this structure.

As I stood in silent wonder, the walls of the observatory began to rotate, giving me a sense of vertigo.  The walls opened and as I looked up to the top of the dome, it, too began to slowly expose the scope to the sky as the center piece receded back onto itself.  The huge blue supporting arms reached high and, as the surreal experience continued, the entire structure began to tip toward me, slowly revealing the majestic mirror, looking like a sea of quivering, silver mercury encased in a huge blue dish.  As the blackness of night closed in around the observatory, we adjourned to the grounds outside the awesome structure, pausing to watch as more and more stars took their age old places in the heavens.  Then, within a predesigned plan, a laser beam shot an eerie,  straight orange line from the scope far, far into space.  Against the blackness of the night time sky, it was an incredible sight.
As we left the observatory late that night, I was humbled and filed with wonder as I again was a child of seven gazing into the vastness of the heavens..... 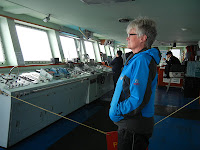 "I had thought they would be gone" was the answer to why I was crying.  I couldn't figure it out.  The Chilean captain had announced that blue whales were off the port side of the ferry and as I rushed out to see them, I caught my first glimpse of the biggest mammal that has ever existed on the planet.  As I watched the four individuals dive and move around the ship, I started to cry.
Deep emotion is often connected to deep, long un-accessed memory.  As I searched for the root of my tears, I remembered an eight-year-old Jess doing her "show and tell" presentation on "endangered species," a new concept after the 1973 act signed by Nixon became law.  I had chosen "Blue Whales" and pasted pictures of them and sea life into a shoebox diorama.  My report to my third grade class was about how we had overhunted them to probable extinction and less than 1% of the intelligent giant denizens of the deepest ocean were left.....yet the hunting continued.

At the tender age of eight, I mourned their loss from my planet.  I thought they were gone.  Yet, there they were before me on a cold day near the coast of Chiloe Island.  A few thousand exist, persisting and surviving.  Seeing them wild and free made me cry tears of deep joy and gave me hope for other species, including our own.