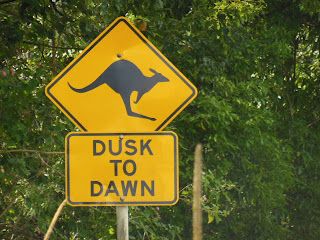 One wonders what pattern of living you might enjoy if completely free to choose.  We have learned to savor dusk and dawn.  We plan trips, outings, and places to stay around opportunities to enjoy twilight times.  Both dusk and dawn are magical transition times in which one world quiets down while the other awakens.   And as you will see below, all species, including our own, are influenced by these special moments of change as the earth fades from or faces the sun each day.
The best example of such transitions might just come from a tiny mining town, Pine Creek, Australia.  Pine Creek has a few hundred people but thousands of birds and bats.  At dusk, for reasons no one really understands, thousands of birds from dozens of species pour into a few trees in a small park.  The glint of the old dying light shines off the crimson bellies of rainbow lorikeets and transforms the metallic aquamarine color of rainbow honeyeaters to an ocean blue in the last rays of sunlight.  The bird chorus rises to deafening proportions as they cry out their final songs into the night and ghostly bats fill the blood orange colored horizon flying in from daytime roosts.  At dawn, the bats ease away and the birds begin their raucous calls an hour before the first glint of sun fills the morning sky. 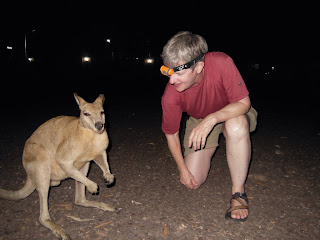 It is in places like Pine Creek that we have found a passion that causes us to walk into the forest in the dusk, lights turned off unless necessary.  We have held still for the better part of a night listening for the crackling footsteps of one of the kiwi species to emerge on a moonlit trail in New Zealand.  At dawn on a beach in Australia, we searched for and followed tiny flipper prints of hatchling sea turtles emerging at midnight from a nest and racing toward the sea.  In Costa Rica we walked behind a guide and found three- and two-toed sloths moving slowly through the trees.  We observed vipers poised to strike, waiting for the heat signature of a smaller mammalian prey.  In Australia we snuck out onto a canopy bridge and trail walk and found, to our night adjusted eyes' delight, a glen of Gloworms.  Gloworms are fungal larvae that spin single strand webs dangling their attractive nighttime offer of light to unsuspecting moth prey.  The musky smell of decaying Eucalyptus will be imprinted in our memories along with the sight of their blue green lights glowing softly like a tiny field of stars in the forest. 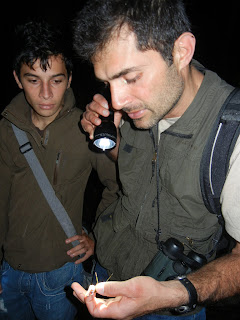 And it is not only the other animal species that attract our attention from dusk to dawn.  Human patterns of vibrant life differ across the world as well.  In Argentina, we cruise the street at 5 am in a taxi heading for the airport to watch the first customers begin to emerge from clubs and tango joints.  We found out, much to our dismay, that even 9 pm was too early for dinner in many places including a restaurant we loved in Buenos Aires.  Yet in New Zealand, hostels close their doors by 6 or 7 pm and in Australia, even on a Saturday night, the miners in Pine Creek call 10 pm a late night.

We have purchased a strong light to aid us in our nighttime hunts for koalas, spiders, honey gliders and wallabies.  We have spent many early predawn mornings slipping out of hostels or campgrounds quietly and heading somewhere in the dark to watch one world lie down and another awaken, reborn again. As we prepare for Indonesia and Malaysia, we wonder what will emerge in those distant locales at dusk and dawn.

Images are of a sign near Nimbin, Australia; Sally communing with a wallaby in Katherine Gorge National Park, Australia; and of our first Costa Rica nighttime tour guide at Pasion tours, Marcus, who was training a your apprentice on the arts of insect ID.

Posted in Darwin, Australia
Posted by Jess and Sally at 7:15 PM