And still they come... 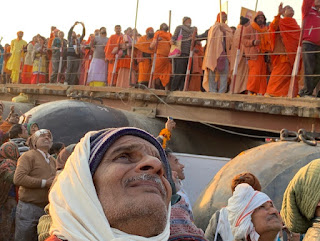 Faith.  As we pondered what we sought to learn by embarking on extensive global travel a few years back, we surprised ourselves.  We knew we wanted to see the natural and cultural wonders of the world:  gaze at Mt. Everest, wander the jungle temples at Angkor Wat, watch lions prowl at sunset in the Serengeti, bathe in the sea with whale sharks, and taste the sweet burn of street food in Thailand.   What was a mystery to us each is that we also wanted to participate with and observe how people worshipped throughout the world.  Neither of us would consider ourselves religious at this point in our lives, but would believe we are, at times, spiritual.  Raised like so many in our nation as one type or another of the vast branches of Christianity, we had long since left the formal religions that constrained us as women and lesbians.  While things have progressed, so much of what we believed was good about our identities was often at odds with the practices and expectations of the religions of our youth. 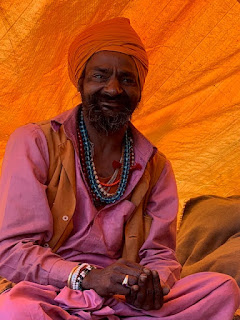 So why was watching others practice their own religions something we wanted to explore and understand?  Perhaps it is the beauty and terrible danger that we see in those with deep faith.  Whether it is the vision of planes flying into buildings or bombs going off in crowded spaces or simply a few minutes of evening news anywhere in the world, we see the terror of extremists transform and inhibit people’s lives across the globe.  Recently during our travels in  Hindu dominated India, Muslim extremists from Pakistan bombed a military convoy, killing 40 soldiers and tipping these two nuclear nations into a conflict wrought with danger.  As we scrambled to get away from an area in which jets were now firing on each other near the border, we learned that the deep root of this conflict was… faith.  In the late 1940s, when the country finally cast the colonial cape of England from its shoulders, a majority of leaders at the time (not Gandhi) felt there must be two nations where there once was one.  Muslim Pakistan and Hindu dominated India emerged from the agreements and a great forced migration occurred.  Tens of thousands were attacked and murdered as they lost land on one side or the other of a hastily drawn border and fled from those who were once neighbors.  The deep division of one nation under many gods led to uncertainty of which nation controls Kashmir to the north.  This is the ground that three wars have contested and where religious extremists strike out in guerrilla attacks. 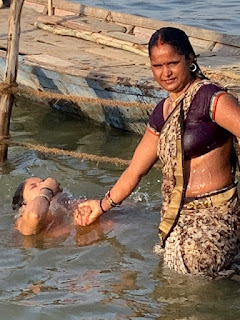 Yet India is also the same nation where the world’s largest peaceful gathering emerges every 12 years.  The Kumbh Mela is one of the most amazing experiences of our travels.  Over 100 million Hindu pilgrims make their way to the waters of the holy Ganga River where three rivers merge.  The Ganga and the Yamuna meet with another, unseen and of the spirit world, as they collide in a place where drops of immortal nectar were purported to have fallen from the sky as gods battled.  Here, the pilgrims take “the dip,” submerging themselves multiple times below the polluted waters to cleanse themselves of their sins much, like the Catholics do in confession booths.  We were graced by the gift of living for four days with a local family who had eight giant private wall tents right alongside the Ganga.  There were hundreds of thousands of tents placed on the sands and metal plating built to hold an impromptu city.  There we experienced the modern wonder of an organized infrastructure built on a sandbar the size of Manhattan that would, once again, be under water in a dozen weeks when monsoons drove the rain rich river to rise.  Water, electricity, sewage, cell service, and even free WiFi were present, as well as a dozen temporary bridges all built to carry and support the pilgrims and their Sadhus (Hindu holy men) into a small area on the banks of the Ganga where they would walk in, fully clothed if women, and immerse themselves alongside tens of thousands doing so at the same time.  All patiently waited hours for a turn on the three most auspicious days of the month long festival.  The government shuts down the freeways and streets to vehicle travel on those days, and we marveled at the steady, continuous flow of humanity of all colors and classes walking toward us and to the river.   After three days, we could only utter in wonder “And still they come…” There was no fighting, no stealing, no pickpockets in this crowd of millions, rather a sense of faith in a sea of saffron colored Sadhus and naked Naga holy men.  While many pilgrims had resources, most did not. They simply slept where they could find a place to lie down and those with food or wealth fed those who had nothing to share with others but their faith.  Tears streamed from our eyes as we watched three elderly sisters, who, for each morning for 28 days, had walked slowly together to the shores of the Ganga, supported by grandchildren and loved ones, to hold each other’s hands in a triangle of matriarchal strength and dignity, and immerse themselves 11 times under the gray waters of the Ganga.  Why did we cry?  Like the sight of our first glimpse of Everest or the improbable breaching of a blue whale, we glimpsed something beyond our abilities to comprehend, but we saw in it beauty.

“It is wonderful, the power of faith like that, that can make multitudes upon multitudes of the old and weak and the young and the frail enter without hesitation or complaint upon such incredible journeys and endure resultant miseries without repining.  It is done in love, or it is done in fear; I do not know which.  No matter what the impulse is, the act is born beyond imagination, marvelous to our kind of people, the cold whites.”  (Mark Twain an the Kumbh Mela, 1895)

Written in Majkali, India
Images are from the 2019 Khumbh Mela near Allahabad, India