For most of our lives, the words “protective custody” brought to mind images of FBI, U.S. Marshals, and others in law enforcement helping crime victims or those who are about to testify, escape retribution from violent criminals.  During the past few months, as we traveled through Europe and watched the human drama of asylum seekers, experienced a virus outbreak, and studied the rise of fascism, the words “protective custody” brought new and disturbing images to our minds.

In Greece, we were occasionally engaged with locals in discussions of what to do with the asylum seekers flooding the country from places like war torn Syria, as they funnel in through Turkey and across the water to Greek Islands.  The country has a history since the time of Greek and Roman gods of being a gateway to immigrants moving north and eastward, their faiths and ethnicities merging and shaping new cultural and agricultural practices throughout Europe.  Currently, there are camps on Greek islands where refugees are held in a type of “protective custody,” not allowed to move on toward a new life in distant lands, but unable to move back to war torn violence with all infrastructure shattered and homes destroyed.  Days turn to weeks and months to years in these camps and many locals, once welcoming, have had enough.  There were those who defended Greece’s positive immigration history and supported the continuation of welcoming the refugees and those who wanted it to stop to protect the culture and community that now exists.  In the space between those views, thousands are held in “protective custody” within camps. 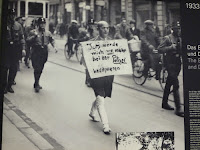 The parallels to our country’s origins and current debates were strongly on our minds as we considered both of our own family’s immigrant roots and the roots of those we love and admire.  We drifted from Greece back to Italy and toward Austria, Hungary, Slovakia, and Germany and found ourselves following the rise of fascism in the 1920’s and 30’s that led to not only World War II, but an unimaginable holocaust initially disguised as bringing those who were increasingly politically targeted for hate into “protective custody” (the term used at the time).  Jews, Roma Gypsies, political enemies, homosexuals and dissidents were arrested under the guise of new policies and laws and brought to Hitler’s expanding network of concentration camps as an emboldened government, supported by business and increasingly by its citizens, began a campaign of genocide that would test the world’s resolve and ability to fight against fascism. 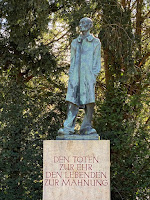 A quick search for definitions of fascism describes it as a form of far-right, authoritarian ultra-nationalism characterized by increasingly dictatorial power, and forcible suppression of opposition. Contemporary ideas on how fascism grows and spreads is that it is promoted through hateful rhetoric, fear, propaganda and a deliberate smashing of institutions associated with truth.  We spent hours in a document museum in Munich and the Dachau Concentration Camp memorial nearby, looking at the rise of Nazi Germany that led to Hitler’s ascension into power in 1933 and the rapid, unimaginable changes taking Germany from a democracy to a brutal, fascist country in less than 5 years. 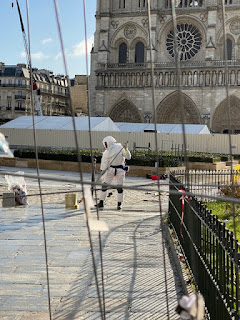 As we pondered our intended journey from Munich to Prague, Poland, and ultimately Berlin, following the rise and fall of the Third Reich, disturbing news of lockdowns, forced detention, and people being refused service based on race or origin began to flood the news and internet with the arrival and spread of the coronavirus.  Increasingly, fear of disease disrupted the flow of transport and goods rocking a world where increased nationalism and rhetoric about “others” has become common rather than rare.  Quarantine, medically recommended, is an important tool for reducing epidemics but the fear that has emerged is clearly pandemic.  As two healthy adults, it was not fear of coronavirus that made us wonder if it was time to come home, but fear of fear itself as borders closed, flights were cancelled, and neighbors were sending unfortunate victims hate mail. 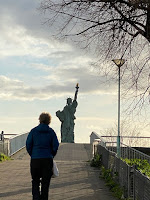 We arrived back in the United States a couple of days ago.  As policies change by the hour on campuses and in communities, we are staying away from our campus, from those who are old or immune vulnerable, and waiting 14 days till we have confidence that we will not bring unintended challenges to our communities and country.  We read the news and increasingly worry that the conditions that have given rise to global nationalism are now ripe for those who use fear to gain power.  The coronavirus, like World War II, has made it clear the degree to which we are globally connected and the degree to which fear influences us.  What is unclear is the degree to which the disease will unite rather than divide us all.

Images are from a Morningstar news article about Greece Refugee camps; of the sad beginning of a new fascist era in Germany 1933 (image from the Document Museum in Munich); the Unknown Prisoner Memorial from the Dachau Concentration Camp Memorial; Workers in full contamination suits outside of Notre Dame Cathedral in Paris this past week.  We have no idea why.  And finally, of Sally gazing at Ms. Liberty in Paris.

Posted from a place of refuge in Arizona.
Posted by Jess and Sally at 5:26 PM